“Joshua got his GCSE results today and I just wanted to let you know how he got on. He got an 8 in English Language and a 7 in English Literature, he has always struggled with English and wouldn’t of been able to achieve these amazing grades without yours and Adam’s help, if you could please let him know how Joshua done. So once again thank you for all the work you did with him.” Emily (parent) 2021

At the time of writing this testimonial, my daughter has had only 5 sessions and her confidence and ability has increased significantly!  (Now) she talks of enjoying maths and of her abilities in maths instead of her inabilities, participates more in maths lessons at school and is keen to do her maths homework, both from school and from the sessions.  As a parent I am thrilled that her confidence has grown significantly and would recommend I Love to Learn without hesitation.

I would like to thank you for everything that you have done, and also pass on my gratitude from Lottie because she has learnt she has really benefited from and her confidence in maths has vastly improve, so much so that she now tells me that she looks forward to maths class at school!

We are so pleased that Mahera has got a FULL BURSARY for the local girl’s high school in Portsmouth.  She has been to your centre before for tuition but we came back in November so she could get ready for the exams.   She has worked so hard and Linda has really encouraged her in her writing!  Thanks so much!

We brought him to the centre in Year 6 because he just had no idea about maths.  This year won the ‘Most Improved in Maths’ certificate for his year.  He also came top of his class in 2 out of 3 maths exams.  Coming to here is the best thing we ever did!

“Thanks for all your hard work with Rebecca Kivlin. She has started Milton Cross this week. Rebecca is in the top set for maths and science, and the second group for everything else. Without coming to Love to Learn she would never have achieved this.  Thanks”

Albie had been diagnosed with mild dyslexia and his reading age was around 2 years behind!  The standard in private school is often higher, so we were worried about the Entrance Exams.  Soon after he enrolled he started making rapid progress.  The school say he is now Level  5 in literacy and the teacher can see a lot of difference.  His reading age has shot up and the gaps in maths have been filled in and he has caught up amazingly quickly. It has definitely, definitely made a difference and I have recommended the centre to my friends.

I was told at school that Harrison had fallen about 2 years behind in reading, writing and spelling. Harrison took to it straight away.  He has made fantastic progress and is meeting all his targets.  He loves the points and prizes that he collects for working so he comes out buzzing after every session!

GCSE Maths Success in Only 3 months!

Alex had always found maths difficult at school.  He found himself in Year 11, dreading the thought of taking his GCSE maths exam.  He enrolled with us for maths tuition with just three months to go and attended two lessons a week to try to catch up.  It was the repetition and individual attention that he found very helpful.  Alex says ” I learned more in three months than my whole time in the maths classroom at school.  I  went from dreading it to feeling much better about being there.”

This Summer he was overjoyed to find that he had gone from a Grade 2 in his mocks up to a Grade 4 (C) pass in his final exam.  Now he is at Portsmouth College studying his A levels and very happy!

Howard Jones his tutor said, “Alex was a very motivated student and knew what he wanted.  I was able to channel this energy into a really positive direction.  If students are prepared to put in the work it is amazing how quickly some targeted one-to-one tutoring can make a difference in many cases.” 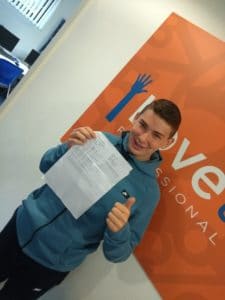 Simply complete our form to book your FREE assessment.